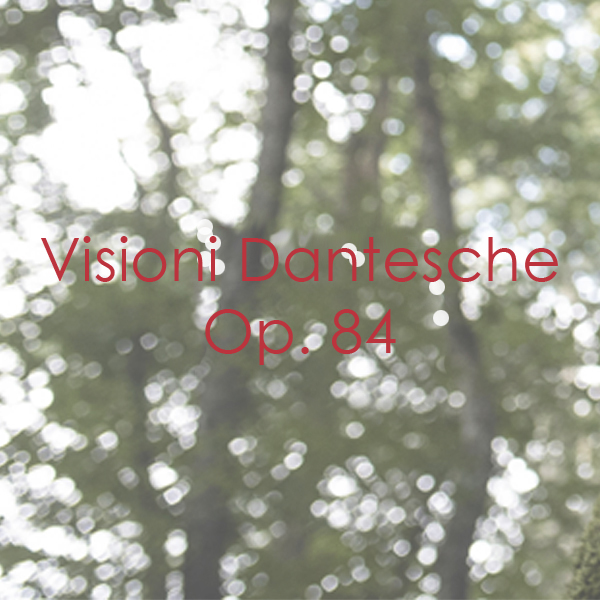 I wrote this piece on the occasion of the seven hundredth anniversary of Dante’s death, to pay a tribute to the genius, to the giant of Italian literature. His masterpiece, “The Divine Comedy” fascinated me a lot. I let myself be transported with strength in his imaginary journey through hell, purgatory and heaven, and I translated all the emotions and suggestions that gradually inhabited me into music. The music begins with nervous figurations of biscrome, the expression of a disturbing and gloomy atmosphere, which turns to life with exaltation, in order to describe the frightening circles of Dante’s hell. The musical discourse then unravels towards an even more shady, gloomy and silent atmosphere, until it disappears, bringing with it a perception of waiting, through a long pause. The dissonant chords, dark and rarefied, give rise to purgatory, expressed in a very slow trend, which transport the mind to another dimension. The succession of exasperated chromatisms and refined harmonies lead to the introduction of the theme connected to the figure of Beatrice, an ethereal and extremely sweet melody that characterizes and identifies her, then reappearing towards the end of the piece. In the final part of the purgatory, the musical discourse presents itself with a crescendo that evolves until it reaches a D flat major chord in fortissimo. It is the light of heaven: a succession of grandiose tremolos ever more dense, which then arrive at a pianissimo, characterized by dissonant but always very sweet harmonies. The theme of Beatrice presents itself again, bringing the piece into a coda characterized by chromatisms superimposed on an ethereal, dreamy melody, gradually disappearing with increasingly imperceptible sounds.